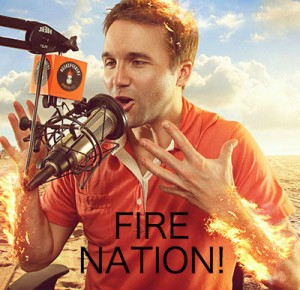 “The world is full of dull and uninspiring nations. Really, none of them can compete with Fire Nation,” said John Lee Dumas. “That’s why I’m announcing that we are accepting applications for citizenship in Fire Nation.”

This announcement came as a surprise because many people apparently mistakenly thought that Fire Nation was not a ‘real’ nation. Clearly they underestimated John Lee Dumas.

“I thought I could just listen to the podcast and that made me part of Fire Nation. I’m excited that I now have a way of making it official,” said a podcast listener who spoke on the condition of anonymity.

“Other nations, like the United States, charge around $700 to apply for citizenship. Given that we are a premium Nation, I plan to charge $1999. Not only are we premium, but you will have instant access to your life-changing citizenship benefits unlike the months or years of waiting for citizenship in other nations,” said the press release that announced this new opportunity.

John Lee Dumas is the creator of the Entrepreneur on Fire Podcast which has become so popular it has grown from podcast to nation-state in just under 4 years.

We obtained transcripts from a private facebook group in which Dumas explained the business rationale:

“This is a great way to take a brand to the next level. I know it’s a risky move, but think about the brand loyalty that other nations have! High risk, high reward, baby! We could put together an Olympic team and everything. There are so many ways this can help my business and provide value to the future citizens of Fire Nation!”

Nation building appears to be the next hot trend in internet marketing. If you want to apply to Fire Nation, you can download the application below!

Posted on March 16, 2016 by PJ Moneybags. This entry was posted in Uncategorized. Bookmark the permalink.