Pat Flynn to Subscribers, ‘The time has come for me to extract value for myself.’ 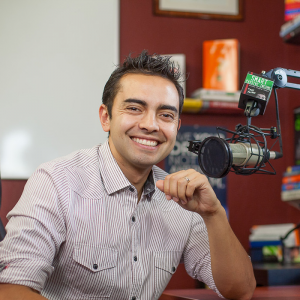 After years of selflessly giving high quality value to millions of podcast subscribers, blog readers, and fans, Smart Passive Income founder Pat Flynn has announced he will now reverse the process and begin mercilessly extracting value wherever he can find it.

In a recent podcast episode entitled “9000 more Unread Emails Back to Inbox Zero”, Flynn deviated from the announced topic to go off on a 9 minute 47 second diatribe that began when Flynn screamed, “You people know I have a family to support, did you really think I would be giving away all this value forever and not expect anything in return?”

Although much of the content during Flynn’s profane harangue is inaudible, many listeners reported what they believe to be the sound of a table being flipped over as well as the phrases “thankless ingrates” and “value sucking parasites”. Other listeners mainly remember the two minute period in which Flynn kept repeating, “It’s such bull&!*@…It’s such bull&!*@,” over and over again. This portion of the podcast was largely omitted in the episode transcript.

Local man and subscriber to the free Smart Passive Income podcast, Greg Bullock, was very surprised by the anger he heard in Flynn’s voice, “I always liked Pat for his down to earth approach and what I thought was a genuine desire to help people become successful. I’ve never experienced this side of him.”

There was a 45 second period roughly 8 minutes into the tirade in which only sobbing could be heard, followed by Flynn wistfully stating, “The time has come for me to extract value for myself.”

The show notes for this podcast episode did include a special message from Pat in which he wrote:

“Because of my commitment to transparency I’ve decided to present the original unedited episode in its entirety. I hope you can appreciate that I was going into some of the dark places in my soul and that I am really hurting. While I regret some of the language I chose to employ, my core message remains: it’s time for me to get mine.”

It’s not clear what triggered the easy going and beloved internet entrepreneur to embark on a fulmination spanning nearly ten minutes, which included most of the known curse words in the english language as well as many of those common to the Filipino language.

A source close to Pat Flynn, speaking on the condition of anonymity told PAI, “Patty always tries to put on a good face but I think that he’s felt for a long time like people take his content for granted.” The anonymous source also relayed, “[Pat] always expected people to reciprocate more. Over time he felt more and more used and I think it just kept eating away at him. This outburst, however unfortunate, could be part of a long overdue healing process.” When asked if there might be any additional explanation to this uncharacteristic rant, the source added, “I also think he might have been on the first day of a juice cleanse at the time.”

As of writing Pat Flynn had not responded to Passive Aggressive Income’s request for more information.

Editors Note: We all know that the research shows that internet marketing is quite stressful. Our thoughts go out to Pat during this time of recovery, this could happen to any of us.

Content Upgrade: Pat Flynn did send out a tweet, later taken down, of which PAI obtained a screen capture.

Posted on December 11, 2016 by PJ Moneybags. This entry was posted in Uncategorized. Bookmark the permalink.