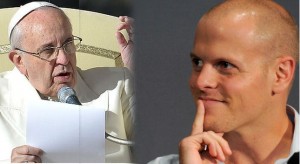 The Tim Ferriss Show has really taken off. There are many reasons for the success but one is that Tim is able to land guests who generally don’t do podcast interviews. Movie stars, politicians and world class athletes comprise his guest roster. It’s truly impressive.

Tim recently announced that his next guest will be Pope Francis. This is big news, but everyone is wondering how he landed such an elusive guest.

Tim agreed to an exclusive interview to let us in on how this came about.

Passive Aggressive Income:
Your podcast is truly amazing, Tim. How do you get so many amazing guests?

Tim Ferriss:
Well, you know, I’ve made a lot of connections through all of my world travels and start-up investing. Most of my podcast guests are people I already know from living my awesome life.

Passive Aggressive Income:
How did you get Pope Francis to agree to an interview?

Tim Ferriss:
As you probably know, I spent a lot of time in Argentina where Pope Francis was born. We first met shortly after I won the world Tango championship and we’ve kept in touch from time to time ever since.

Passive Aggressive Income:
Amazing! How did you meet him?

Tim Ferriss:
You may have heard that Pope Francis was a bouncer at night clubs before he was Pope. Well, I was clubbing one night and met him while waiting in line at an exclusive club. We struck up a conversation and realized that we had a lot of similar interests. Argentinean culture, Yerba Mate, performance hacking and brazillian jiujitsu to name a few.

It’s a funny story actually. He invited me to his dojo to spar the next afternoon and I was like ‘ok, this guy is old so I’m going to humor him and go easy on him,’

He kicked my ass.

I thought I could hold my own with jiujitsu, but about 5 minutes after we started the fight, I woke up on the floor realizing that his Holiness had choked me out. Pretty embarrassing really.

Perhaps this is how he has no problem going out at night to feed the poor of Rome without the Swiss Guard to protect him. He can handle himself.

Passive Aggressive Income:
What has your relationship been like with the Supreme Pontiff since then? 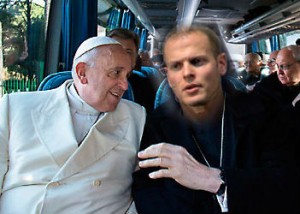 Well after he choked me out, I was obviously impressed. We went our separate ways and I ended up bumping into him on a bus months later in Buenos Aires. He was coming back from the Cathedral and was complaining of all the administrative work he had to do. You know, he wanted to spend more time helping the poor and not answering emails and doing paper work.

I had no idea how much administrative work Bishops have to do!

This was when I was pitching the 4 Hour Work Week, so I taught him how to do an 80/20 analysis and helped him set up an auto-reply on his email. He was able to cut out most of the administrative work.

He was so blown away by the time savings he encouraged me with the 4 Hour Work Week. At the time I was pretty discouraged because I had already been turned down 18 times. I didn’t want to keep going. He said, “Tim, I will pray for you. I will pray a novena for you and in 9 days you will have a book deal.”

I thought to myself, I’m not very religious, but what have I got to lose? So I submitted my book to one more publisher and 9 days later it was accepted.

Passive Aggressive Income:
Were you nervous asking him for the interview?

Tim Ferriss:
Oh definitely! But this isn’t like getting an introduction to a venture capitalist in Silicon Valley where you can just get an email introduction whether or not the VC wants it. Booking the Pope takes a long time. The Catholic Church measures time in centuries so they’re not in a big hurry. Also, they’re all Italian over there… I had to go through a lot of steps to do it properly.

When he got back to me, it was in an official apostolic letter. It was in latin, so after using my meta-learning skills to teach myself ecclesiastical latin in 3 weeks, I was able to read it. It said that he’d be happy to do it over Skype. He also mentioned that he requires every member of the Roman Curia to read the 4 Hour Work Week. He said that he’s tried to put the whole Vatican on the Slow Carb Diet, but they weren’t willing to give up pasta.

I’m excited to reconnect with my old friend and deconstruct how he became the leader of more than a billion Catholics.

Oh and one last thing… I’m making my next “5 Bullet Friday – Papal Edition” available exclusively to your readers. I hope you enjoy it!

Posted on March 30, 2016 by PJ Moneybags. This entry was posted in Uncategorized. Bookmark the permalink.